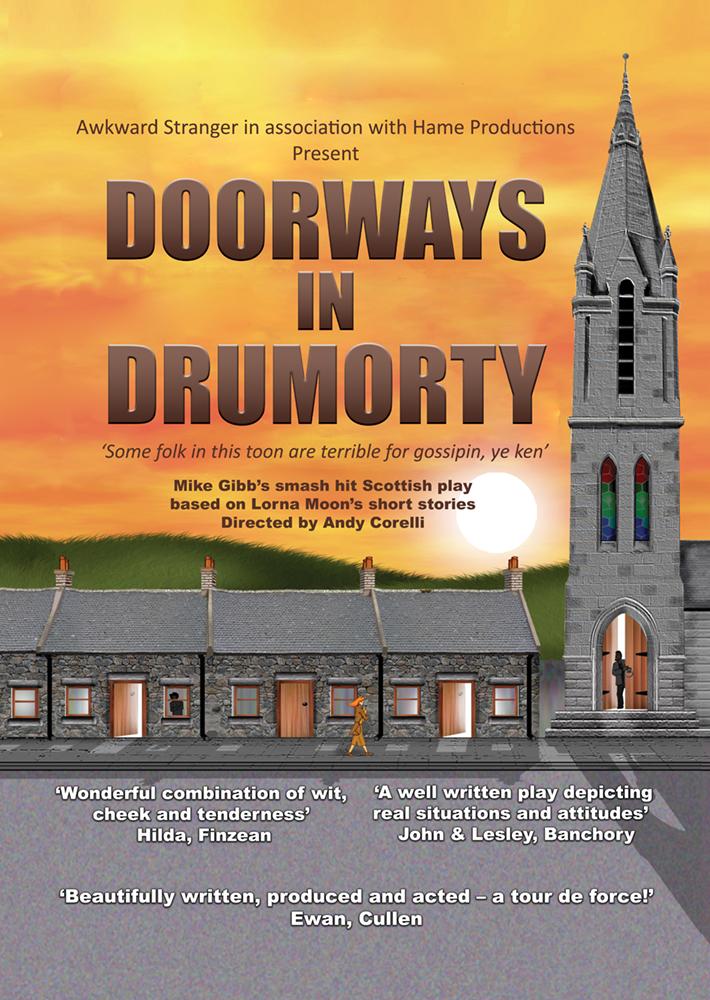 Wonderful performance of ‘Doorways in Drumorty’ coming to The Victory Hall, Benderloch, Wednesday 15th May 7.30

This has been touring throughout Scotland over the past few weeks to sell out audiences and standing ovations. Don’t miss this opportunity to catch this show and support live theatre in our village halls.

Born and raised in Strichen, Aberdeenshire, Lorna Moon was an author, poet and leading Hollywood screenwriter. For years, she was its highest paid female scriptwriter writing screen plays for movies starring the likes of Norma Shearer, Gloria Swanson and Lon Chaney Jr. Yet her book of short stories ‘Doorways in Drumorty’ was banned from the local Strichen library for 50 years because the town’s inhabitants were horrified at recognising themselves in the books characters! Set in a 1920s gossipy, rural Aberdeenshire community, this witty play is based on that same Lorna Moon book.

First produced in 2010, this new production of Mike Gibb’s hugely successful play, ‘Doorways in Drumorty’ will tour to 18 venues across Scotland between 18 April – 18 May 2019 with the kind support of North East Arts Touring and Aberdeenshire Council.
——————————————————————————————
‘Doorways in Drumorty’ follows the story of Jessie McLean who seemed destined to become a spinster when at 16 the young man she fell in love with, left town never to return leaving her alone and unfulfilled. 35 years later, a young girl in a similar though more extreme version of her own circumstances, helps her discover an inner courage which she uses to foil the myopia of those around her. Set alongside Jessie’s tale, are six vignettes depicting the experiences of other characters in the town.

Laugh-out-loud funny yet steering through a sharply satirical observation of the personal agonies of the town’s inhabitants – particularly females – beset by the strict observance of moral codes and prohibitions. It is as moving as it is amusing.

Playwright and author Mike Gibb has produced a stream of Scottish-themed musicals and plays since the late nineties, including the internationally acclaimed Outlander the Musical.

2019 is the 90th anniversary of Lorna Moon’s novel ‘Dark Star’ which provides one of the stories for the play.
Running time | approximately 2 hours including interval