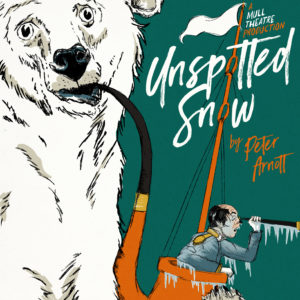 Mull Theatre production, Unspotted Snow by Peter Arnott is coming to The Victory Hall in Benderloch on Tuesday 16th April at 7.30. Tickets £10 or £8 under 26 years. Tickets available from Terry Donovan on
terry@backwoodsman-stoves.co.uk or 01631 720498 or on the door.
A melodrama in two parts, with music, commissioned by Mull Theatre directed by Alasdair McCrone, production design by Alicia Hendrick. A new work based on the tale of the ill-fated Franklin expedition to discover the North-West Passage and it’s extraordinary 170-year legacy. This light-hearted romp is a play of two halves… the first set on the barren ice floes of the Arctic and the second in the equally inhospitable environment of Lady Jane Franklin’s drawing room. Unspotted Snow is a bold and adventurous tale of tragedy, mishap, folly and arrogance, of starvation and madness, of scurvy and cannibalism. It is a cautionary tale, with some jolly tunes, of true-blue British heroism and ruthless news management.
Actors
Beth Marshall as Lady Jane Franklin and an Inuit woman
Alan Steele as Dr John Rae and Chalmers, a Scottish sailor
Alan Mackenzie as Lt. Frank McLintock and Lt. Fleming, both naval officers
Kirsty Findlay as Miss Sophie Cracroft and an Inuit woman
Alasdair McCrone as Professor Hopkins, a noted hydrologist, and a mysterious guest
In 1845, Sir John Franklin and 129 men sailed off in search of the Northwest Passage from the Atlantic to the Pacific by way of the North coast of Canada. They were never seen again…
After nine years, news of the expedition was at last brought to London by the remarkable Orcadian explorer and physician John Rae, who worked for the Hudson’s Bay Company. The news he brought was both tragic and grizzly. Unfortunately for Rae, this was the wrong story – true, but wrong, and very much not the story that Victorian England wanted.
The tale of the expedition itself has fascinated the general public, scientists and explorers for over a century and a half. From early findings of frozen corpses and a few artefacts to the very recent discoveries of the expedition’s boats, the Erebus (found 2014) and the Terror (found 2016), successive generations have been enthralled by the ambition and derring-do of the explorers and by their terrifying, macabre fate.
Here’s a link to the 2019 Arctic Return expedition, and an article from the BBC website which will give some background to the storyline of Unspotted Snow:
https://arcticreturn.com/?fbclid=IwAR0Yn_BGBiOY84EO6hxIn3PHLQc2KT2W3qf65Uyl5uM9e6fCNLzJ7MMm-Ok
https://www.bbc.co.uk/news/uk-scotland-north-east-orkney-shetland-47611240?fbclid=IwAR02OsPJHhE9rMl-_Rs-WetTYURUbReDGxL1-SXwHH8ttEox9qADAgX17wA