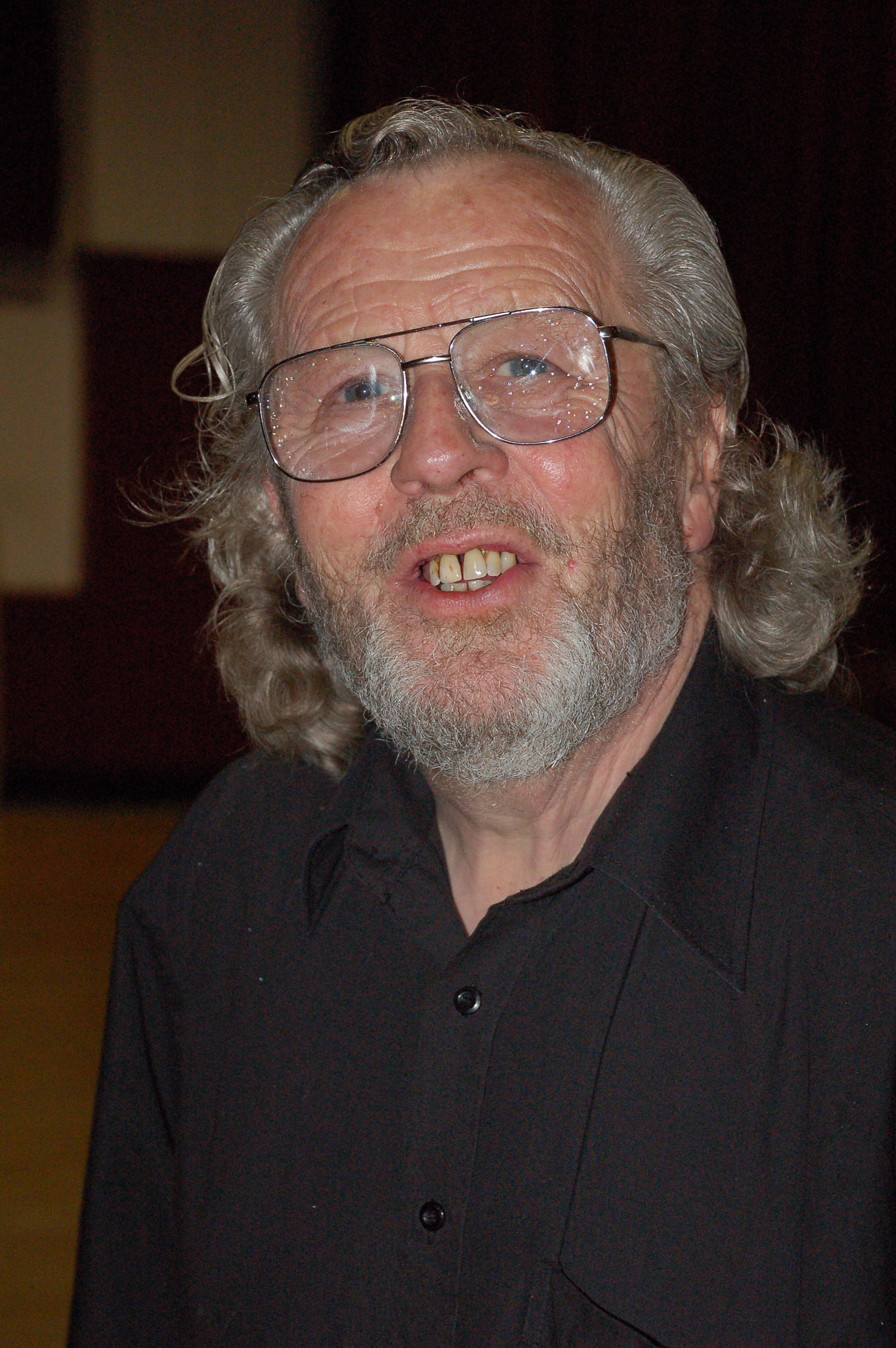 It is with great sadness that that we tell of the passing of Geoff Miller.

Geoff and Maureen (his wife who passed away in December) – came up to the area to retire in the area nearly 20 years ago.  They both became very active members of the group with Maureen concentrating on costumes, fundraising and Front of House with Geoff taking to the stage as our set designer, constructor and often stage manager. They both served on the committee and ultimately influenced the group to become a SCIO.

His first show with us was “The Sound of Music” in 2001 where he and Jamie Smith built a very extensive set of sets and from then there was no stopping him.

It was at a time where there was not a lot of money about to put on shows and his ingenuity and skill in building and inventing was extraordinary.   Trucks, moving trucks, folding trucks, big and small came forth from his garage (he always wanted a bigger one !) and from the farm – where he would “freeze his ****** off “ he would tell us (this eventually led us to constructing in the relative warm of the hotel which allowed the male members of the society to retain some of their anatomy). He also made a full size police box , helped engineer a Dalek and gave us the wonderful sewer set for “Guys’ and Dolls”.

Perhaps the pinnacle (or not) was the creation and operation of an exploding cuckoo clock for which he even had his photo an biography included in the programme for “Crazy for You” credited as “handler” for Cecil the Stunt Cuckoo… we jest not.

Having retired from a high technical engineering level in BT his understanding of cabling, connections and systems was a great asset as was his knowledge of radio mics and other equipment  which he maintained.

His love of smoke was legendary – often the set would be nicely obscured by too much smoke leading to the phrase “Geoff’s in!” even when we would go  to see professional shows where smoke attempted to upstage the actors.  His uniform of a headtorch, utility belt, electric powered screwdriver / drill and other tools hanging from him also earned him the nickname “Geoff of Borg”  in some quarters as he advanced out of the gloom with a chuckle of  ‘ello mate!

He was determined that Spotlight should better itself with each show technically  and was a stick in the mud for procedures, safety and practicality (probably harking back to his BT days)

A kind man with a wicked black sense of  humour, Geoff was always up for a laugh – although his addition to a painted frog on a stick to give it testicles and a “proud penis” never actually made it to a performance (as far as we know) despite many attempts with him reattaching said objects to the prop after they had been removed…..ready for the next performance.

Even towards the end of his journey he was still full of life and ready with an anecdote from his working days – or near stage disasters and his wicked sense of humour came out.

We thank you Geoff for all you did for us as our co-worker, colleague and friend – your influence and dedication  still can be seen  within the group today.

Just a wee update from George and Bertie,
Due to circumstances beyond our control George and Bertie will unfortunately not be appearing at the Ardrishaig festival this year.
We are both very disappointed but we would like to thank all our friends at spotlight for their support, who knows, George and Bertie may appear again!!

Spotlight are have a Halloween Fancy Dress Ball,

The rugby club has been booked for Saturday 30th October.
The evening will begin from 7.30pm until lateÂ  !
We will be able to boogie the night away with Louisa’s fantastic choice of disco tunes.
Tickets will be on sale at rehearsals for Â£2.00. (this is to pay for the buffet food).
With rehearsals being so busy we felt this wee evening would be a good chance for everyone, old and new members to have a catch up and relax with a drink., a good old boogie and lots of laughter.
Hope you can all make it.
Kind Regards
KateÂ  B.Â Â  x

For all members called this will take place from 9am until 5 am at the Guide Hall on 3rd October (Call is 10:00) but we start rigging the equipment and green screens at 9am

Kevin will also be directing the photo shoot trailer

Members not called please feel free drop drop in and see what is going on from 10:00

Backstage Bunny fun thanks to “Daisy-Cam”

Is on Sunday the 19th September 2pm Until 5pm
at the Guide Hall – All members Welcome.
Jean will teach us all kinds of things – but very important – warm ups
and exercises to help us all sing better (and safer!)

Both stalwart members of the group and we all wish you good luck and hope to see you soon.

Time For School! An early Chirstmas Present from SpotlightMTG

Or any of the photos Below for the Full Size Image

The bear head as been “found” – or to be more accurate – the bear head was left at the bottom of Louisa’s close all nice and dry and neat.Â  Where it has been – we don’t know – who had it – seems uncertain – reason for absence – we will never know – we are just glad it has returned (and has now been returned to the hire shoppee)! Phew!